A great song is a great song; and as such, I make no apologies for including not one, not two, but three versions of today's great song. 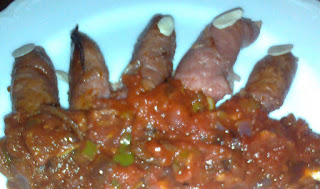 My only concession to Halloween this year (I spent the entire evening with the lights out not answering the doorbell*) was digging out an old playlist I did for my friend when she ran her own bistro. Six or seven years ago Kate used to put on a lot of themed nights and, one in particular, Halloween 2011, was particularly memorable. Not least because of the scary food that was on offer that night. The sausages you see pictured made for a unique starter, let me tell you.

But, back to the playlist. I had a lot of fun with it - looking back at it now you can see the, often tenuous, linked songs that were on there. I put a ton of stuff on it, enough to last all night (we were there from 7 o'clock till midnight) - here's just a flavour:

You get the picture, I'm sure.

Of the 80+ tunes on there (opening with this), the one that jumped out at me (and I've been playing it in the car all week) is 'I Scare Myself' by Claire Martin. Claire took the time to do a Q&A for my blog back in 2013 and she's an absolute sweetheart.


Although I knew it was a Dan Hicks song the version I was most familiar with was Thomas Dolby's. Dolby was, and still is, a studio geek, so by playing around with tape speeds he actually sounded more like a female vocalist at the time.


And here's the original. Dan Hicks sadly passed away last year. He left behind a great body of work; not least some cracking song titles: How Can I Miss You When You Won't Go Away? being just one of many.

* Which proved more than a little problematical as I was also waiting on an Indian takeaway delivery.
Posted by John Medd on Saturday, November 04, 2017
Labels: Claire Martin, Dan Hicks, Halloween, I Scare Myself, Thomas Dolby