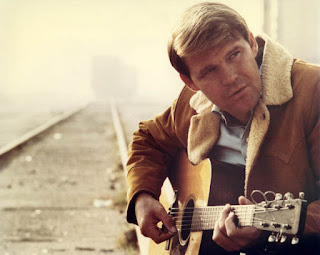 Glen Campbell's days are numbered, it would appear. His dementia, now full blown Alzheimers, was first diagnosed back in 2012 and has all but taken away one of the greatest guitarists (certainly the most versatile) of all time. As well as having hit after hit in his own right, Campbell played on singles as diverse as I'm a Believer, Strangers in the Night (that's right, Sinatra) and Unchained Melody; and a ton of other stuff by The Beach Boys (he was a stand-in for Brian Wilson in 1964/5), Mamas & the Papas, Dean Martin and Bobby Darin. Seeing recent footage of, let's not mince words here, this legend is nothing short of heartbreaking; best to remember him this way - a mesmerising TV appearance including a masterclass in how to play guitar, and a jaw dropping solo rendition of Wichita Lineman. I strongly urge you to watch it.

I love Any Trouble's homage to the great man. I saw Clive Gregson perform this beautiful song at a house concert a couple of years ago, and it made the hairs on the back of my neck stand to attention; there's not many songs that can do that these days.


Any Trouble - When I Hear Glen Campbell Sing