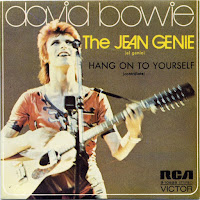 Bowie's The Jean Genie is nearly 45 years old. Can you believe it? It was released as a single in November 1972, before appearing on Aladdin Sane the following year.

'Make Me Your Baby' by Giorgio Moroder, meanwhile, will be 50 next year. Moroder, the man who gave us Chicory Tip's 'Son of My Father' and a ton of disco smashes including Donna Summers' orgasmic 'Love to Love', released this prototype for the Jean Genie in April 1968.


Giorgio Moroder - Make Me Your Baby