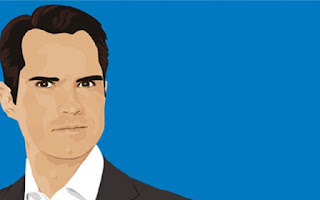 I have trouble with Jimmy Carr; I think a lot of people do. For every gag that has you choking on your false teeth, there'll be another hot on its heels that will make you feel uncomfortable; you'll laugh, but you'll still be uncomfortable. And for a comic who openly admits that, with the exception of the Hillsborough disaster, everything else is fair game, then you're never far away from a joke that some a lot of people are going to find offensive. But, hey, you know that when you step over the threshold.

His appearance last week on Desert Island Discs was very revealing. Give it a listen and you may come away with different feelings towards the fella; I know I did. The way he spoke about his mother, dyslexia, Catholicism, depression and not losing his virginity until he was twenty-six was very honest and at times very touching. And when he chose 'I Will Follow You into the Dark' by Death Cab for Cutie as the record he'd save from the waves, I was practically reaching for the fan club application forms.


Death Cab for Cutie: I Will Follow You into the Dark