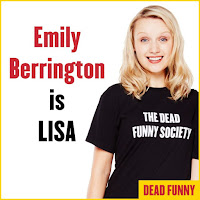 A day spent up town yesterday. Top ranking indeed: an hour atop the sky deck of the Shard where visibility - at 1,000+ ft. - couldn't possibly have been any better, followed by lunch in the Nell Gwynne in the heart of Theatreland. If we hadn't had tickets for the matinee performance of Dead Funny I think I could, quite easily, have taken up residence in the little hideaway pub just off the Strand and stayed in there all afternoon. I do have form.

But, with five minutes to go before curtain up, we strolled the twenty or so yards to the Vaudeville next door and took our seats for the revival of Terry Johnson's wonderful play, which first opened at the Hampstead Theatre in 1992. I won't spoil the story for anyone who hasn't seen it yet, suffice it to say that it's essentially a black comedy using, as it does, the deaths of Benny Hill and Frankie Howerd as a springboard for the slightly dark farce that follows. I absolutely adored it. And as much as I loved the stellar performances of Steve Pemberton, Ralf Little, Katherine Parkinson and Rufus Jones, it was the beautiful Emily Berrngton that, for me, stole the show. It's running till next February. Try and get along if you can. 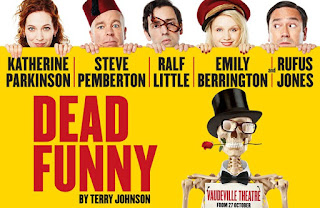 @BerringtonEmily I've never laughed as much as I did at Sat. matinee. Great play, great perf. And as for your Benny Hill tribute costume...
Posted by John Medd on Sunday, November 20, 2016
Labels: Dead Funny, Emily Berrington