Single of the Year (and it's still only March) 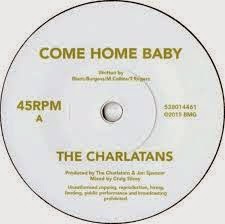 That's right. If a better single is released between now and New Year's Eve then you'd better point me in the direction of the nearest Burton's.

And here's the thing about The Charlatans (well, two things actually): it transpires that they don't come from anywhere near Manchester. And, they've never split up: God knows what they've been up to in the last twenty years - I don't think I've heard a peep out of them since the heady days of Britp*p and TFI Friday.

Anyway, their latest 45 may sound suspiciously like Good Enough by Dodgy (and none the worse for that), but as The Number One Son said to me last week, you don't get many Rhodes dominated tunes sounding half as infectious as this.