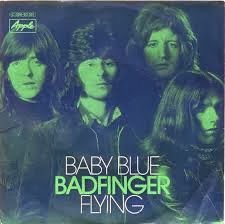 Aimee Mann's clutch of songs on the Magnolia soundtrack, including her rendition of Nilsson's One, elevated it from being a good picture to being a very good picture. And when she covered Baby Blue it all but overshadowed all other offerings on 1996's Come and Get It - A Tribute to Badfinger. Who knew that, 20 years later, thanks to Breaking Bad, the song would become inextricably linked with the production of methamphetamine.