'So what's this new song all about then?' my friend Phil says as we walk down to the acoustic jam. 'Kings & Queens? Sounds like a homage to The King's Head and Queen's Arms in Leeds.' Spoken like a true Wessie.

No, I've not written a song about public houses; in Leeds, or anywhere else for that matter. But I may have breached my own code about crossing over into (*looks over shoulder*) political songwriting. I say may: it'll be on the new EP later in the year. Tell me what you think then. Bloody hell, get me with my new EP. I'm still banging the drum for Pickering Place (named after London's smallest square, since you ask). Oh, and I'll be playing it in its entirety at The Kirk Theatre with my good friends David Swann and Frozen Gin. 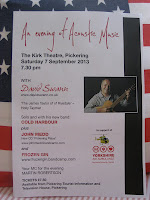