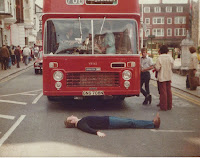 Note the surly Ted leaning on the bus

Long before Planking  (the lying down game) was invented, I took this photograph of a friend of mine: Simonjohn went in for a lot of that sort of thing. And as long as I had a camera about my person I never dissuaded him. On the contrary. I'm sure later that same day he lay down in front of a lifeboat on the slipway. Having not seen him for thirty years I can't categorically say that his planking days are behind him. But I'm guessing that along with liberating 'For Sale' boards from people's front gardens and storing them in his bedroom, it's a pastime that has been consigned to the history books. Probably.
Posted by John Medd on Friday, January 25, 2013
Labels: Cromer, Planking, Simonjohn Rigg, Surly Ted