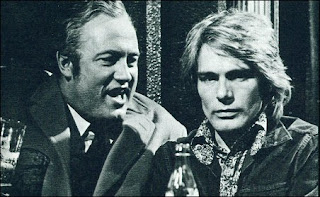 I've never written a fan letter. But there are two I wished I had penned. Too late now, both would be recipients are on the other side: George Harrison, a frequent cameo stalwart of this blog, and Keith Waterhouse. And who, to the best of my knowledge, never met.

Keith Waterhouse the Leeds born writer and (some would say) inventor of the liquid lunch was a wordsmith who could turn his typewriter to novels, short stories, screenplays, TV, newspaper columns and still be back in the pub for last orders.

If I had scribbled a few words to him I would told him that from the day his seminal Billy Liar appeared on our English Language O Level Sylabus I've never not had a book on the go. In fact, I'm currently rereading Office Life: a A Waterhouse novel from 1978 which, I'm sure Magnus Mills used as the template for his The Scheme For Full Employment. But he was so much more than Billy Liar (not that he needed me to tell him that); scriptwriter for The Frost Report, That Was The Week That Was and Whistle Down The Wind gained him serious credibility in the 60s. And, with his good friend and co-writer Willis Hall, came up with one of the 70s most memorable TV series - Budgie. Adam Faith brought their script alive and depicted a seedy and down at heel Soho while still giving its characters - Budgie Bird and Charlie Endell - and their surroundings a rich and multilayered veneer. Jeffrey Bernard Is Unwell proved he had lost none of his magic and later novels like Bimbo, Our Song and Palace Pier were among his best ever. The latter possibly being the finest depiction of Brighton after Patrick Hamilton's West Pier. Looking back, it's probably just as well I didn't write. It may have left one or both of us feeling a little foolish. Maybe I should have just bought him a drink instead. Cheers Keith.