Live At The Fontana Bowlarama 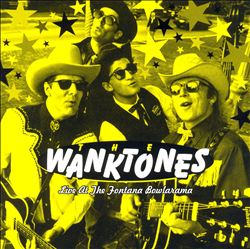 The Fontana Bowlarama: where everyone's a winner

The Wanktones (featuring Ersel Wank on lead vocals and guitar) have barely recorded (they released just one single and album); they dislike the studio because they have to pay for their own beer there and think that playing the same song over and over is time wasted that could be spent back on the farm.

Over the years there have been a few changes in the lineup. Floyd Glen Burnie (The Wanderer) replaced Elmer on bass after he died trying to drive his convertible through the liquor store window one Sunday (the plate glass severed his head a la Jane Mansfield). Later on Floyd Glen Burnie disappeared after a show with a redhead driving a car with Georgia plates - he was eventually replaced by the handsome local mailman, Hooter McFeeley. The Wanktones' biggest loss, however, was that of their boyhood chum, Bo Link. Bo's tragic death on the farm upset them so much that they quit playing music for three years. Ersel felt reponsible for Bo's death, for it was he who had souped up the electric milking machine to increase the daily output from the cows.

The Wanktones still occasionally play club dates in the Washington DC area but in the past these trips have always coincided with the purchase of tractor parts. A few years ago Del Marva (lead guitar and backing vocals) bought one of those Japanese tractors and the boys haven't been to town since.

The Wanktones - Down the Line mp3
Posted by John Medd on Wednesday, September 12, 2012
Labels: Fontana Bowlarama, The Wanktones