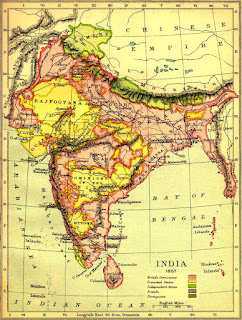 Driving back yesterday from a baking hot very damp Devon (one afternoon on the beach - wearing a waterproof - does not a holiday maketh), we were in need of a fillip. And Radio 4's Hobson-Jobson: A Glossary of Colloquial Anglo-Indian Words and Phrases, and of Kindred Terms, Etymological, Historical, Geographical and Discursive did the job; a thoroughly riveting thirty minutes charting the story of the Colonial-Indian dictionary; how it was conceived, written, published and in the 21st century, despite the fact that the days of Raj and Empire are long gone, the lexicon lives on.
Hurdy-gurdy, hugger-mugger, higgledy-piggledy, hocus-pocus, tit-for-tat, topsy-turvy, harum-scarum, roly-poly, nirvana, pyjamas, bungalow and juggernaut are proof indeed (no need to watch Goodness Gracious Me re-runs) that if these words didn't exist we'd have to invent them. It's still up on the iplayer if you missed it.
Posted by John Medd on Sunday, July 15, 2012
Labels: Hobson-Jobson, Radio 4