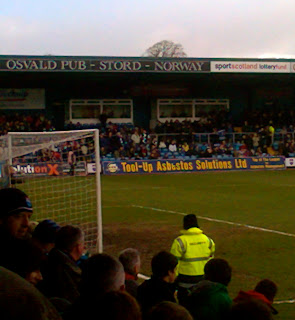 North is one of the four cardinal points on the compass. It is the opposite of south. We've just spent a few days in The Highlands - Inverness to be precise. And it is very north. While we were there we pulled in The Bandstand Beer Festival in Nairn; without doubt the most northerly beer festival I've ever been to. But it was only when we went to see Ross County and Dundee kicking a pigs bladder around on Saturday afternoon that we realised just how far north we'd come (Ross ply their trade in Dingwall) - The Osvald Pub in Stord, Norway have an advertising hoarding on the main stand. If only I'd taken my passport.

Congratulations to Ross who have won the league by a country mile. They'll be toughing it out in the SPL next season; I'll be looking out for their results. And I really must praise the food in the tea bar at half time - their Haggis Pies were sublime.
Posted by John Medd on Monday, April 16, 2012
Labels: Dingwall, Football, Haggis Pies, North, Norway, Ross County