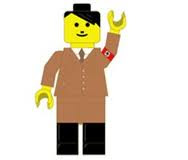 It appears that these days everything looks like Hitler: cats, houses, even babies. Remember when Bowie was caught on film at London's Victoria Station in '76 doing his now infamous Nazi salute? I suppose when you decamp to the Fatherland and record three back to back albums that are referred to as the Berlin trilogy, it must be tempting to try a sneaky Sieg Heil.

Then again, he did have previous.