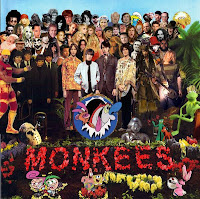 Boy bands. Don't you just love them? Who do you reckon was the first? The fact that such an accolade is often bandied around when talking about The Monkees is to totally rewrite history. It also airbrushes barbershop, doo-wop and harmony groups from pop's rich tapestry: The Ink Spots, anyone? But, in as much as they predated The Osmonds and The Jackson 5, Messrs. Dolenz, Nesmith, Tork and Jones were certainly among the first guests to arrive at the party.

Back in 1966 the moguls at Screen Gems decided to manufacture a group to rival The Beatles. And, as befits such a manoeuvre, it was all done very tongue in cheek; giving four unknown actors (that's right, actors not musicians) a 'zany' script, hiring in some professional songwriters (and a house band) and then pump out the resulting mix on prime-time coast to coast television - and seeing what happens.

And what happened was a massive TV show, numerous Top Ten hits including three Billboard No.1s (I'm A Believer, Last Train To Clarksville and Daydream Believer), an iconic logo that still makes me smile and (though it would take many years) a grudging acceptance by the public that at least half (if not three quarters) of the band did prove themselves as bona fide musos. Sorry Davy, you should have stuck with Coronation Street.

re they ever a serious threat to Beatlemania? No, of course not, don't be silly. Have they left a lasting legacy? Well, yes the 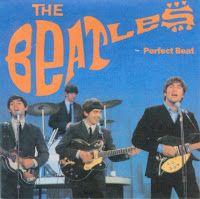 y have actually; whether it be the rich seam of catchy singles, the critically acclaimed Headquarters album or Head, their cinematic wig out with Jack Nicholson, The Monkees place in rock and roll history is assured. Oh, and don't forget Robert Wyatt's blinding cover of I'm A Believer.

During their heyday comparisons with our own moptops were rife. But in as much as a Skoda and an Aston Martin both have four wheels and an engine, there the similarity ends. However, as the photographs of Micky Dolenz, Mike Nesmith and Peter Tork testify, they did get to meet their Liverpudlian counterparts though it's doubtful they joined forces in any songwriting circles. If they had, maybe they would have beaten Go Home Productions to this: