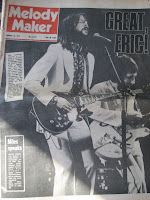 Prompted by Pete Paphides, aka Mr. Caitlin Moran, I've dug out these examples of sartorial elegance from the back pages of Melody Maker. It's from January 20, 1973 (priced at 8 new pence, or 50 cents if, per chance, you were buying it in the USA) and has Eric Clapton on the cover pictured at his comeback gig at London's Rainbow Theatre the previous Saturday.

Looking rather fetching in his white suit, a look also favoured by Messrs. Presley, Lennon and Hopkirk, Clapton would have been looking out at a crowd not sporting Cream or Blind Faith tee shirts (back then rock and roll merchandising was still in short trousers) and nor would his disciples have been wearing anything with a designer label. No, what Clapton would have seen was three thousand guys and gals dressed in garments like these: 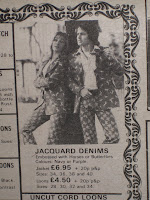 Or, more likely, these (note the subliminal cigarette advertising): 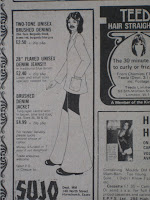 Just as well the term fashion victim hadn't been coined back then; there are two pages full of embroidered loons, velvet loon jackets, Danish clogs, male clogs, brushed denim dungarees, genuine RAF overcoats, shaggy pile jackets, cavalry boots, velvet caps, square neck vests...I could go on, but I think you get the picture. As Paphides says, these are historical documents. If you want to know what was going on (or to see what the natives used to wear) during a particular time frame, look no further than back issues of the British music press.
Posted by John Medd on Sunday, March 13, 2011
Labels: Elvis Presley, Eric Clapton, John Lennon, Loontastic, Marty Hopkirk, Pete Paphides, Rainbow Theatre