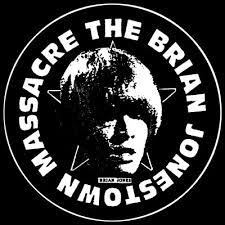 I don't think I've led a sheltered life; when people say you need to get out more, I don't think they ever said it to me. So how come I'm only now* just hearing about the Brian Jonestown Massacre? And in particular the song I'm spending every waking** hour listening to? It's called Anemone (a word I struggle to both spell and say***). And it sounds like this. But you knew that already. (You obviously got out even more than me.)

** And non waking; I swear it's featured in two of my dreams already this week