Deeper Than You Think 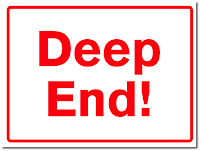 One of my favourite showbiz anecdotes concerns David Niven - actor, gentleman. And more than a little flawed*.

In the late 1960s before leaving his home in the south of France to go on a film shoot, Niven gave specific instructions to his builder for the dimensions of his new swimming pool. Thirty by twenty by eight.
When Niven came back the pool had been built to his exact requirements. Sort of.

Ever the Brit, Niven had been talking in feet. His French builder, however, had been listening in metres.

Niven would often boast that he owned the deepest swimming pool in Europe, if not the world.


* It was said of Niven that he had charm. But not to spare.
Posted by John Medd on Monday, February 04, 2019
Labels: David Niven, george benson, Joe Sample