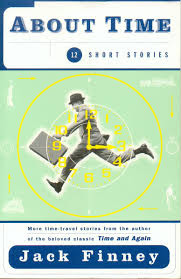 Since discovering Netflix earlier this year we've been filling our boots with Fringe. The Number One Son introduced us to this most quirky of series - a cross between Diagnosis Murder and Invasion of the Body Snatchers - when he lent us the first season on DVD. Now, thanks to Netflix, and three seasons of Fringe later, I can see DVD box sets going the same way as video and the 8 track cartridge.

With parallel universes and time travel being a staple of Fringe (one of the reasons James pointed me in this direction) I've been rediscovering Jack Finney, one of my favourite authors. His excursions into the past - through such portals as a hidden level at Grand Central Station or time travel sold through travel agents - have always fired my imagination. Re-reading his short stories again after a number of years hasn't lessened the vibrancy and genuine excitement of his storytelling. If you've never read him, you must. Start with his About Time collection. I promise you'll be hooked.
Posted by John Medd on Saturday, June 13, 2015
Labels: About Time, Fringe, jack finney, James Medd