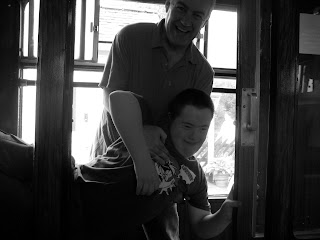 My cousin Ray has been around these parts on at least one previous occasion. Not not only do we share the same set of grandparents, but also a love of all things Beatles; in particular A Hard Day's Night. I can count on the fingers of one hand the number of conversations we've had that hasn't contained at least one line from the film: 'He's very clean, your grandfather' being a hardy perennial. Last Saturday, on a trip to the seaside, we found ourselves in what can only be described as a Hard Day's Night carriage - so with a little help from his son (my second cousin, I think) Jack, we tried to do a little FAB re-enactment. I'm out of shot holding Jack's feet.

A little later we took our guitars down the corridor to the mail carriage and played 'I Should Have Known Better'.