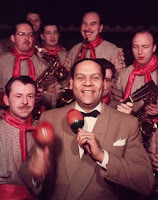 Whilst all the talk this week, starting tomorrow certainly, will centre around the anniversary of Lennon's assassination, I've not seen many people pick up on Edmundo Ros' 100th birthday today.

Born in Port of Spain, Trinidad 7 December 1910, Ros made his name in London from the 1940s onwards as bandleader, arranger and vocalist with his own samba and Latin American orchestras. With residencies at The Coconut Grove and The Bagatelle, his gigs were often a Who's Who of the current stars and starlets of the day. Even a very young Princess Elizabeth was known to throw a few shapes on the floor before taking on her current job.

Ros played his last show in 1994 but remains in relatively good health enjoying his Spanish retirement.