At Sixes and Sevens 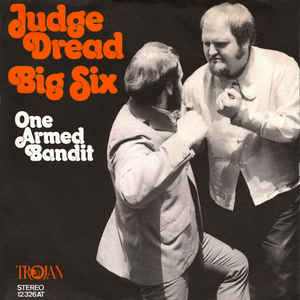 On Sunday evenings in 1972 any self respecting teenager with access to a radio and a rudimentary tape recorder could be found in their bedroom with their fingers poised over the play and record buttons as they constructed their very own playlists. Between 4pm and 6pm the weekly chart rundown was presided over by Radio 1 jock Tom Browne. All the platters that mattered got an airing; well, nearly all. For some reason the Beeb had a problem with Judge Dread. Tom would skim over the fact that Big Six (and later Big Seven) was sitting at #8 in the charts - but steadfastly refused to play it. What was going on? What could it be that prevented it from being played on the airwaves? And who was buying it if nobody could hear it? It would be a number of years later till I got to hear it in full. And what great tunes they were (Six and Seven). My 11 year old self would have loved 'em, nothing's so sure.

I don't know if Dread, real name Alexander Minto Hughes (1945-1998), lost too much slip over his blanket ban by the corporation - probably not (it didn't seem to hinder sales). Everyone loves an anti-hero and in 1972 Judge Dread certainly fitted the bill.