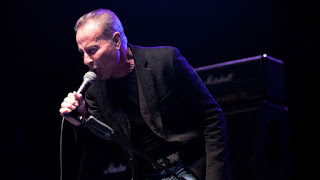 Although not as depressing to read as an obituary, I've just learned that Phil Mogg, 70, is standing down from all UFO duties after a UK farewell tour in 2019. The band will be celebrating their 50th anniversary next year and Mogg has decided enough's enough. Sad news indeed.

"Being out on the road isn’t always tremendously luxurious and although the playing is as great as it ever was, the stuff that surrounds it becomes very tiresome. I always told myself that when I reached that stage I would step down, and that’s what I’m going to do. This is the right time for me to quit."

My love affair with UFO goes way back. Way back. My friend Rocky Newton - who himself is still trading the boards with Lionheart and Airrace - was a devotee of the band and introduced me to them when he and his band at the time, Next, would drop Rock Bottom into their set in the late seventies. I was hooked. I would go on to seeing them live at every opportunity (and later write about them), Rocky, on the other hand, eventually hooked up with their errant guitarist Michael Schenker, joined MSG, and toured all over Europe.

So next year I plan to go on an a mini pilgrimage around the country and try and pull in at least two or three dates, and pay my respects to one of the most underrated rock vocalists this country has ever produced - while he's very much still with us.

The band's last album was, interestingly, a covers album; an album in which they pay homage to a hand picked bunch of rock classics that have inspired them over the last half century.

I've chosen two for today. First up is their terrific interpretation of the Yardbirds' Heart Full of Soul. It was written by Graham Gouldman, so not much more to add really, wouldn't you say?

Next up is a bluesy version of ZZ Top's Just Got Paid. ZZ Top will be forever remembered over here for their classic MTV videos (with that car) and the clutch of radio friendly hits they had in the mid eighties - Sharp Dressed Man, Legs and Gimme All Your Lovin' - but this is far classier. Listen for yourself.