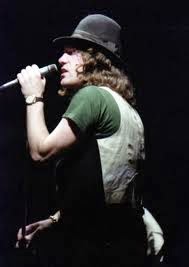 We've just come back from a most enjoyable few days away in Scotland. Walking out of a music bar in Dumfries on Wednesday night I noticed a framed photo of Frankie Miller - he probably played there a number of years earlier. And, much to my chagrin, I thought he'd passed away. But, of course, he hadn't; despite suffering a brain haemorage while working in New York in 1994 (he was in a coma for five months) Frankie continues his recovery on a daily basis.

Miller has written some cracking songs down the years, and has collaborated with and influenced countless musicians including Rod Stewart, Bob Seeger and Joe Walsh. He's probably remembered in this country for the 1976 hit single Darlin' but north of the border he's best known for turning Dougie MacLean's Caledonia into nothing short of a national anthem.

This footage captures Miller at the top of his game performing at Germany's Rockpalast and sporting his trademark Diddyman hat. He'll be celebrating his 65th birthday next week - many happy returns Frankie and welcome back to the land of the living.