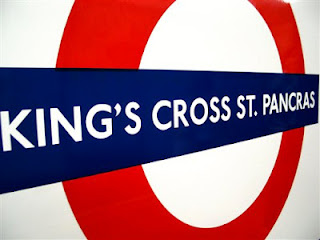 Armed with little more than a rail ticket, some beer tokens, a pair of falling over trousers and my Oyster Card, I was making a whistle stop foray to the Thames Delta; you could say I was on a mission.

Travelling south on a Friday is easy; everyone's coming the other way. And the East Coast Iron Horse, sixteen coaches long, makes light work of the 200 miles that divide York and London.
Arriving at King's X a good ten minutes ahead of schedule I hot footed it to the place I always hot foot it to whenever I land in the capital; hidden away in a maze of streets between Euston Road and Grays Inn Road, I've seen The Harrison transmogrify from humble backstreet boozer to what is now a terrific bar/diner with fabulous beers, a simple menu and always great sounds. Steve and I have been coming here since we set up our company of the same name (we're both huge fans of The Dark Horse). In April of this year they opened a basement bar with music, cabaret and comedy turns - regularly selling out.

A couple of very pleasant hours passed before I look at my timepiece and realise we have an appointment with a very important dignitary: The Mayor of Scaredy Cat Town. Let me explain.

I'd been told that there is, situated not a stones throw from Liverpool Street station, an establishment called The Breakfast Club. 'But I'll have already had breakfast' I told my friend on the inside earlier in the week. Not to mention the handsome lunch I'd put away at The Harrison. 'Listen' he said. 'Walk in, find a table and the waiter will ask for your order.' Nothing out of the ordinary here I hear you say. But here's the twist: when the waiter came I did as I was told: 'I'd like to see The Mayor, please' I said. 'Follow me' he replied. And this is where it gets spooky: he told us to follow him and walked up to the Smeg fridge on the back wall. He opened the door and we were lead, in true Narnia, style into a dimly lit nether world. Down two flights of stairs we found ourselves in a secret bar - an upmarket Winchester Club - very nice,very Speakeasy. Four Moscow Mules later and it was time to continue on our quest.

Going to Southend means catching the Fenchurch Flyer where, in a little over half an hour, east London gives way to Essex complete with Oil City backdrop before we disgorge at Southend Central. And the reason for our smash and grab visit to the seaside? My good friends Mondo and Piley are spinning a few discs at their local hostelry, warming up the crowd ahead of an appearance by the original one chord wonder, T V Smith.

We dump our bags in The Palace (who once played home to Laurel and Hardy in 1952) and slide down to The Railway Hotel. Mondo introduces us to all and sundry - from TV Smith and the delightful Gaye Black (formerly Gaye Advert) to characters with handles like Marmite Boy and Retro Man; we're treated like long lost friends in an almost Cheers sort of way. I've stumbled upon a distant planet where the atmosphere, the decor, the music, the vibe is irreproachable.

Piley and Mondo devour their crates and turn every 45, every album trackn into a floor filler - they even played a few of my requests, bless'em. TV Smith came on at about ten and turned the clock back 35 years. He's got new material, of course, but Gary Gilmore's Eyes, Bored Teenagers and One Chord Wonders are the Holy Trinity that men of a certain age had come to hear him play.

With TV signing merch at the back of the room it's time to restart the Podrophenia engine - and she fires up first time. Top tunes abound and with arms and legs flailing (I'm not a pretty sight when left to my own devices on a dance floor) I drink my last drink, say my goodbyes and disappear into the night. It's been a long day.
Posted by John Medd on Sunday, June 24, 2012
Labels: Bert & Ernie, Gaye Advert, King's Cross, Marmite Boy, Mayor Of Scaredy Cat Town, Oil City, Podrophenia, Railway Hotel Southend, Smeg, Southend, TV Smith